My cat hates my dog. She doesn’t want to look at her. When they do look at each other, it’s utter disdain. I find it sad that they can’t be friends. I’ve seen other dog and cat friendships happen. It’s possible, and I try to impart this wisdom to them. If I were having trouble with another human being, maybe I’d discuss that in a session with my therapist. Unfortunately, cats don’t have therapists and neither do dogs; at least not that I’m aware of. If that were an option, I’d ask both of my animals to work out their issues in a neutral environment with a professional who could navigate their feelings toward one another. 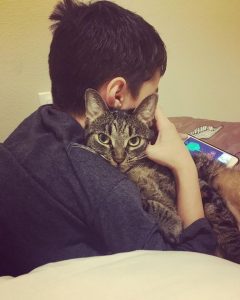 She’s nice and loves to snuggle with us. As soon as she sees my dog, she’s like “oh fuck no.” She’s not into being friends with a creature who whines and barks. I don’t blame her. But, she could at least attempt to work it out with my dog. She’s not even trying. If you want to resolve a conflict, it would be in your best interest to put effort into that. It seems like she’s invested in hating my dog and she doesn’t want to change. She’s content in her discontent. I’ve tried to talk to her about her choice. Maybe she’s not thinking clearly, but I don’t think she cares.

When she walks by my dog, she flaunts her hatefulness. She shakes her tail from side to side slowly showcasing her stripes.

It’s difficult to understand why stripes would make her a more desirable creature, but she clearly feels this way about her markings. My dog is black and white and she doesn’t seem to mind that she lacks stripes.

No matter how much my cat tries to convince her that stripes are an integral part of life, she just doesn’t buy it. I’m not sure I know either way about the stripes. On the one hand, stripes differentiate my cat from other cats that don’t have stripes. But the truth is many cats have stripes, so she’s not that awesome.

The problem is that she thinks she’s awesome. My dog doesn’t see her awesomeness. My dog believes that my cat is a total elitist snob who looks down at people. She’s probably right too. It’s a shame that they can’t see eye to eye regardless of the stripe issue.

They have a lot in common. They are both animals, they both eat from food dishes. They both rely on humans to feed them and pay attention to them. Still, I cannot convince my cat that she and my dog have a reason to relate to one another. She wants to remain a hermit who materializes for food and blankets. We all have our idiosyncrasies and I respect hers.  I admire her independence but I wish she wasn’t so judgmental sometimes.