In the summer of 2017, I couldn’t wait to leave New York. I’d lived there for 37 years and it weighed on me. I was a stunted teenager who was enabled emotionally by my parents and our co-dependent enmeshed dynamic. It was my “fault” for not growing up, but I didn’t know how to, even though I am/was the mother of two kids. I have some mental health “issues” (I hate that word) otherwise known as OCD, anxiety, and ADHD, but the most problematic was OCD because I didn’t know I actually had it at the time. I still cannot believe that I saw my New York psychiatrist for 13 years and he didn’t diagnose me with the most obvious thing that I actually had. I know why though; I didn’t have compulsions, or my compulsions were so subtle that he didn’t notice them. I was checking to see that my wallet and keys were there a lot of the time, but they were always there. And I could justify it because it’s something people do, right? They make sure they didn’t lose their shit in a restaurant or on the street or whatever. But OCD is brutal, man, and it is primarily treated with positive rewards for not being afraid of your brain.

So I finally found out I had OCD but not until I actually moved from Brooklyn to Portland (west coast PDX) and saw a psychiatric RN who formally diagnosed me with it. It makes sense because I am genetically predisposed to OCD, but now I know and the more you know, the better you can handle life. And I’m handling life now in the Pacific Northwest, except that I totally not. I miss New York, I miss blunt people. I miss the mysterious liquid that drips on you in the train when you’re walking down the platform. I miss thinking that you’re getting a seat on the 6 train in the summertime, but the car is actually just not airconditioned. I miss that stuff so much. And I’m not going to get it back in the same way.

I made a friend the other day, over the phone. It’s a complicated story and I’ll try to make this brief, but he tried to help me and my family. And then he got in trouble for it. So now we’re not friends anymore and there’s nothing I can do about it. You know the reason this happened? Because – 1. I am an inappropriate person and 2. I am a New Yorker living in the PNW. People do not know what to do with me. They think I’m aggressive when I’m being assertive, they think I am rude when I’m being myself and I’m tired of it. You might think I’m being a whiny entitled person, but I am so sick of being misunderstood. That’s been my raison d’etre for my entire life. I don’t need an external societal force to tell me that I’m too much to handle. In New York, I am nothing, I’m like a kitten who has rolled over and exposed its belly. These people have not seen what aggressive is. And their sensitive virgin evergreen tree ears cannot handle the word “fuck.” I was told that I had to sign a contract indicating that I couldn’t use profanity on school grounds of my children’s school. It was as if I was starting fights with people, but I wasn’t doing that. You know what I was doing? Being my fucking self, being from Brooklyn, being a person, being someone who uses the occasional f-bomb to enhance a sentence that needs some colorful language. I curse with other adults occasionally, although now I’m starting to stay away from that mode of communication.

What is wrong with me? I’m turning into someone I don’t recognize. Get me out of this land of passive aggressive people who say one thing and do something else behind your back. Not cool at all. I’m not saying this whole place is terrible. I love nature, hiking, friendly people who are actually friendly, dogs, animal shelters, coffee, trains that don’t smell like urine, and trees. But I miss people telling me the truth without being terrified. I miss that, and that’s okay. I miss real pizza and sidewalks that have mysterious black tar stains that probably used to be gum but no one knows what they are. I miss that you mostly don’t know when the train is coming except for when you see the light on the tracks and then you have to quickly step back so that you don’t die from falling onto the third rail.

I’ll come visit and it won’t be as awesome as I’m envisioning it to be; nostalgia is a powerful drug. I don’t miss anxiety-ridden walks down 4th Avenue in Brooklyn where nobody has an understanding of personal space. I’m not excited about people who yell at you when you’re a pedestrian crossing the street and they’re in a car. Anyway, I miss you, New York. You gave birth to me and I’ll always love you, okay? never forget that. 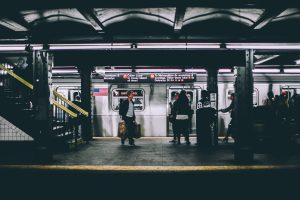