I have relationship PTSD and I’m sad about it. I’ve been hurt, burned, dumped and had my insecurities strewn across the hardwood floors of my apartment. My buttons were on display for men to push and they hit them hard. I had to suffer the consequences of being triggered over and over again. Maybe they didn’t know what they were doing or maybe they did. What I know is that I internalized that trauma. I’m afraid that I will be hurt again, have my weaknesses used against me. At some point in romantic relationships, we hurt one another. It’s not ideal and sometimes it’s ugly, but when you’re in a long-term relationship, you will hurt the other person. It’s a matter of how bad the damage is and whether or not you can forgive one another. Forgiveness is hard for me, and as much I would like to say that I can easily forgive people, that’s not always the case. I try hard to let things go and move on from the past but sometimes those scars have a way of being aggravated. Maybe it’s that they don’t entirely heal and they are prone to be hurt again and again.

Forgiveness is the goal in relationships, and if it’s possible to forgive your partner, do it. I want to do this because it hurts me to hold a grudge. But no matter how hard I try there are certain things that I can’t seem to forgive. I try to let them go, but I re-live the time that the person hurt me. I’m convinced that they were malicious in their intent even if this isn’t the case. Words can hurt, they can cut like knives. I’ve never been in a fist fight but I’ve been in many fights where words were my weapon. I’ve said some horribly mean things to people that I didn’t mean. Anger is an awful twisted and scary emotion that I’d rather not feel. Anger is a part of life and I’m trying to work with my anger as opposed to running away from it or letting it explode out of me without being able to control it. It’s like a car that’s spinning out of control when I’m angry and I’m not sure who is driving the car; probably my emotions. It wasn’t always like this, but once I developed complex PTSD, I started having outbursts of rage. I’d never dealt with that before; I’d always internalized my anger and it transformed and morphed into depression. That didn’t make me feel great either, but it happened.

Because of what I’ve experienced in relationships past, I am often afraid to enter into new relationships. It’s scary to be vulnerable again after being hurt so many times. I am naturally a sensitive and vulnerable person and tend to put all of my emotions on the table. It’s hard because that’s a difficult way to live, but it’s who I am and I can’t fight my nature. Well, I could, but it would just hurt me more. Knowing that I’m naturally out there, it’s easy for me to love people but, when I am in love with someone I go head first without thinking. That is extremely scary and I feel conflicted about it. I want to experience being in love, but I’m also terrified of getting brutally hurt like I have in the past. In order to embrace those feelings of love, I need to let go of that fear. I need to take the risk that I could get hurt. Is it worth it? I don’t know and I can’t know.

I do know this: love is worth it. Feeling connected with someone who understands me is more important than the possibility of them destroying me emotionally. I will continue to love with all of myself no matter what happens because that is who I am and this is my life and I’m going to live it. 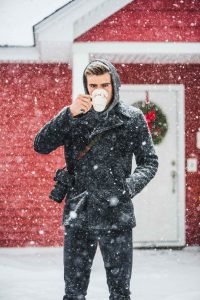