Home/Uncategorized/He Will Get The Help He Needs
Previous Next

For two weeks I was on autopilot, doctors appointments, trips to the Emergency Room, medical residents who didn’t know what they were doing, diagnoses being thrown around and me questioning everything. All of it.  Social Anxiety, O.D.D., Zoloft, therapy, ADHD, pediatric bipolar disorder, hyperfocus, technology addiction. This was/is my reality. I didn’t want to belive that. Any of it. You’re not talking about my child. You don’t know him. You’re looking at a piece of paper and saying things about residential treatment. I know him. You’ve never met him. Don’t tell me what to believe about my own kid. I gave birth to him. I’ve watched him grow and from a tiny infant to a young man. And he’s trying. He has been handed a complicated set of genetics and a series of events that he couldn’t control. It’s like a campfire that was already blazing that someone threw gasoline on. He was treated poorly by the school system, misunderstood, stigmatized, told he was a poor listener, treated like he was a “bad kid.” Children aren’t bad, they are children. He is a sensitive, kind, scared little boy who is afraid to sleep by himself. He is almost 10 and he needs to be reassured that nothing bad is happening to him. He can’t understand the thoughts in his brain. When I ask him, he says “it’s complicated, I can’t explain it.” He probably doesn’t know what they are, what they mean.

The system is broken. The structure that is supposed to help him isn’t doing anything. He’s a number in a pool of other numbers. His case “isn’t that urgent” and he’s not a “high priority,” but yet, I keep being told that things will get better.

They’re not getting better. They just are. We have 10 appointments in the next month to understand what is happening to my son. I wish I could tell you that I had faith that we will get some answers, but I don’t know what to believe anymore. I’m exhausted, and I’m tired of asking other people for help. It’s not fair to them. They have their own lives, children, families and this is my life. My obligation is to my little boy who isn’t little anymore.

I have heard this so many times over the past month. I want it to be true. I want to believe that this road leads to a place of peace. But I can’t know anything at all. None of us can. People have told me that it’s going to work out, but how do they know? They don’t. It’s something that people say when they want to be supportive, empathetic, but they don’t know what to do for you. There’s nothing that they can do. They can’t fix it.

For several days at night I lay there and looked at the white ceiling wanting to cry. It was so painful inside me but the tears never came. Though I wanted them to, they didn’t. I wasn’t ready to break yet. It wasn’t time.

I felt weak. I have been fighting so hard from him and my body is tired. I have been asserting all the power I have and I’ve gotten nowhere.

Maybe it was the acupuncture, the naturopath who read me like a book, who inserted needles into the right spots in my body pushing the qi out of me. He allowed my emotions to flow out of me.

I’m crying now. Sitting here writing here, tears rolling down my face, praying to God that my son gets the help that he needs. He deserves that. He deserves to be happy for more than one solitary moment. I know it’s possible because he once told me:

“Mommy, I feel happy for no reason.”

I know underneath this hopelessness I feel that he will come out of this. It’s not a matter of if, it’s a matter of how. 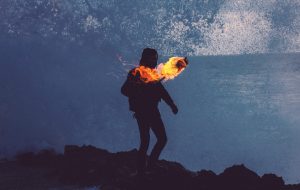